What Are CBDCs and Why Are They Important for FIs?

Central bank digital currency (CBDC) is a form of digital money that is issued, backed, and controlled by a country’s central bank.

Central bank digital currency (CBDC) is a form of digital money that is issued, backed, and controlled by a country’s central bank. CBDCs have been developed in two main forms: retail CBDCs for the use of individuals and entities like cash in digital form, and wholesale CBDCs for the use of financial institutions with central bank accounts to conduct interbank transactions and settlements.[1] The design of CBDCs varies in terms of accessibility, degree of anonymity, operational availability, and interest-bearing characteristics.

Although the present concept of CBDC was directly influenced by Bitcoin, it is different from cryptocurrencies in terms of its centralized, state-backed structure in which the central bank carries all liabilities. It has a separate operational structure from other forms of central bank money, allowing it to potentially serve a different core purpose[2].

CBDCs are an advanced representation of money for the digital economy, combining the advantages of central bank money such as settlement finality, liquidity, and integrity, in digital form. 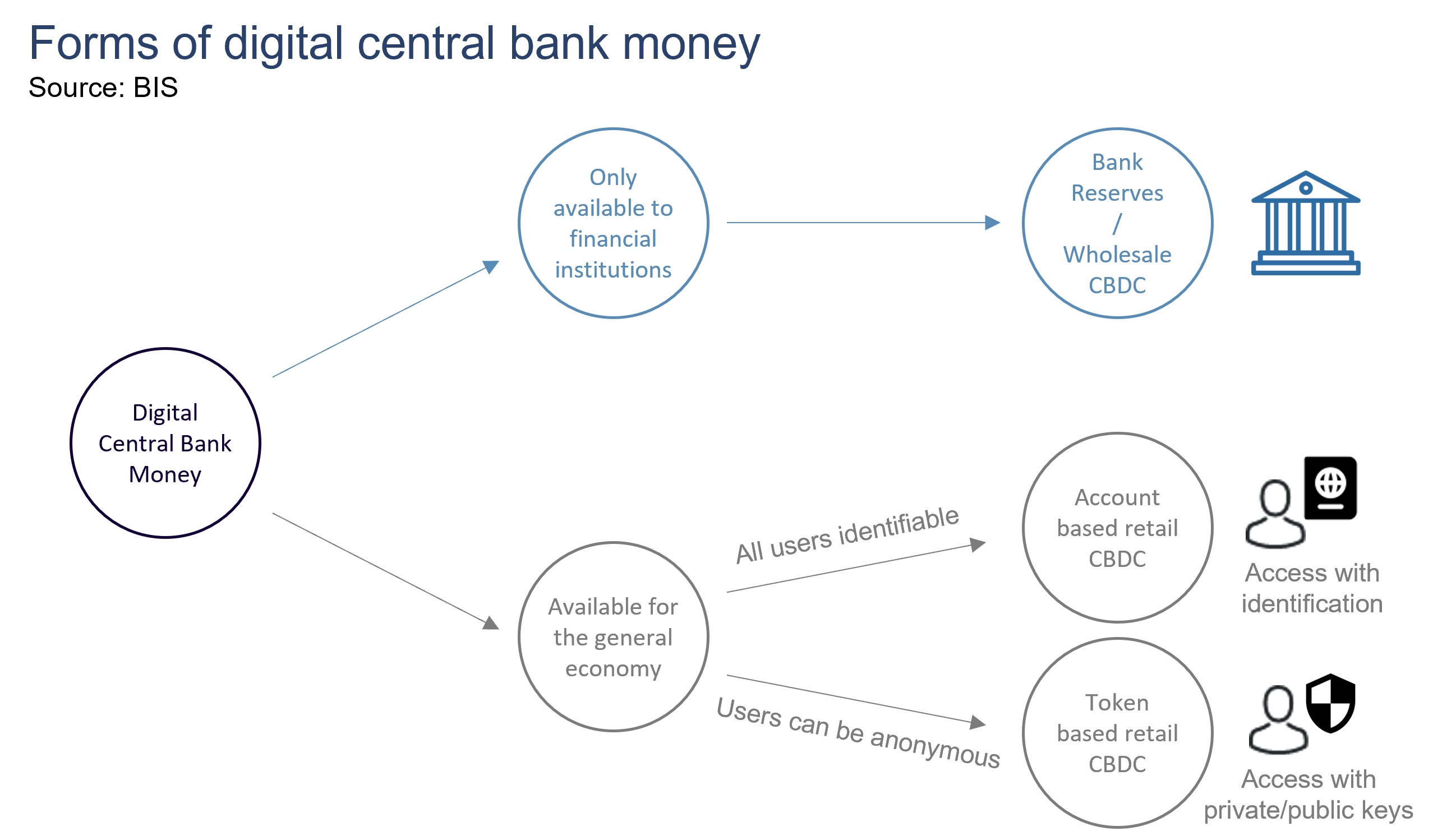 For all financial institutions, CBDCs will most likely bring new opportunities to change, adapt, and grow. Here are some of the potential benefits they would offer:

Improved resilience: In the current payment system that often involves transfers of commercial bank money that are settled on the central bank balance sheet, credit exposures between banks accumulate due to the delay, leading to credit and liquidity risk.[4] Transfers in CBDCs eliminate credit risk as they involve transferring the direct claims on the central bank rather than holding funds at an intermediary. In addition, the transactions would be settled in real time using central bank money, which would increase the overall resilience of the financial system in case of a crisis.[5]

Improved efficiency: CBDCs can improve the efficiency and security of retail and wholesale payments. On the retail side, a CBDC may directly increase payment efficiency at the POS, online, and P2P. For financial intermediary payments, having a CBDC would bring faster settlement and longer settlement hours. It could also help remove low value coins by delivering electronic change. In 2017, The Bank of Korea rolled out a coinless society trial, allowing customers to deposit their change onto prepaid cards instead of accepting small change from purchase. Elimination of low value coins has cost saving benefits as they reach millions of dollars each year per country.

Accelerated cross-border payments: The current model for cross-border payments relies on the central banks operating the real time gross settlement (RTGS) infrastructure within which commercial interbank obligations must settle. This system has limitations to it as there are time lags for cross-jurisdictional payments, during which counterparties are exposed to credit and settlement risk from their correspondents. The benefits of these CBDCs include 24/7 availability, anonymity, and eliminating counterparty credit risk for participants.

Increased financial inclusion: CBDCs will likely drive greater financial inclusion by providing digital money issued by the central bank, that people and businesses can access via their smartphones or digital cards at minimal cost, without the need for traditional government documentation and resources such as a steady income and a permanent address. They will also reduce business cycle volatility by allowing households and businesses in emerging markets to build financial buffers in the form of saving and borrowing.

Security in transition to a less-cash society: Cash use around the world is dramatically decreasing due to more convenient options varying from credit cards to mobile apps. By its nature, cash is difficult to trace and poses a greater security risk than digital money as there is no record of exchange. Although it seems unlikely that central banks would remove cash from the financial system, they may wish to reduce its usage even more to reduce financial crimes. Less cash is not only the natural trend of the developed world but also one of the prominent opportunities for growth in financial institutions.

On the other hand, there are some key challenges that need to be addressed before CBDCs are formally launched. CBDCs under development today are not sufficiently secure in the face of increasing cybersecurity and fraud risks. Also, if all the transactions will be tracked by central banks, the impact it will have on users’ privacy is controversial. Moreover, their launch may pose a great risk to the global banking system, as well as current financial stability and monetary policies, considering retail CBDCs’ potential elimination of financial intermediaries such as banks and payment service providers.

Despite significant challenges, the immense effort countries put into CBDC development clearly shows that governments are already aware of the inevitable transition to a digital payment system. By allowing broad access and offering strong data governance and privacy rules based on digital ID, CBDCs have the potential to lay the foundations of a vastly efficient global payment system. To realize the full potential of CBDCs, a holistic strategy and international collaboration are crucial.[6] In this way, CBDCs can efficiently work in the global market, scale when necessary, and adapt to the changing requirements of the financial ecosystem.

Arf is a Member of Visa Innovation Program

If you are a neobank, e-wallet or remittance company you can become a partner of Arf Network with a few lines of code to unlock next generation opportunities for your business.